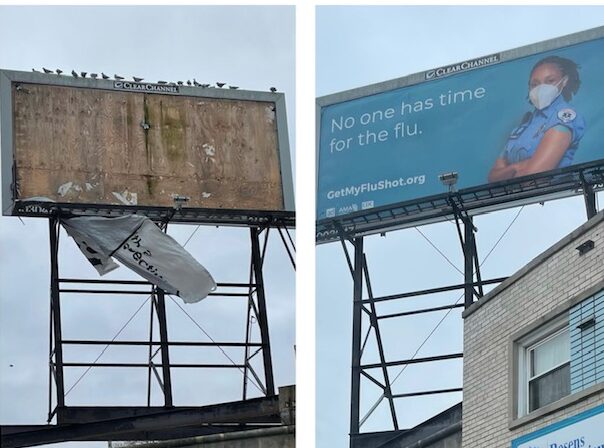 Ellen Doppelt, JNDC executive director, launched a volley of calls and emails to the company that controls the billboard to see what could be done.  Clear Channel Outdoor staff informed Ellen that the previous (now shredded) billboard had run out its time and a new commercial billboard was scheduled for March.

Finding it unacceptable that shoppers and merchants up and down Devon should be forced to endure the overhead mess throughout January and February, JNDC provided photos to the company to underscore the point that what remained was degrading to the street.

We’re happy to report that Clear Channel Outdoor stepped up and installed a health-related PSA billboard, provided by Ad Council.  They will also be moving forward to provide pigeon prevention at that site.

Shop on Devon and see for yourselves!  Free parking available.