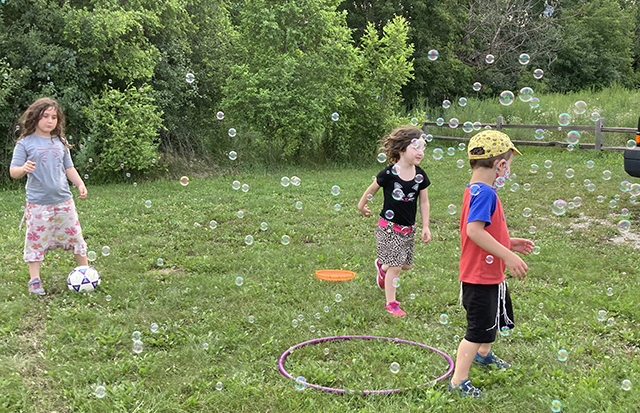 “Getting together with people, being outside, seeing so many people, that was really fun,” gushed Ahuva Peikus, 11.  Perspired but exultant, Ahuva was one of some 30 kids – and as many adults — who participated in games, activities and just-plain chillin’ at Park 538 in West Rogers Park, Thursday, July 22, compliments of Chicago Park District’s ‘Rollin’ Rec’ Activity Van.

It all began when the tricked-out fun mobile pulled into the park, spilling hula hoops, kid-friendly archery gear, soccer equipment, bean bag tosses and more onto the 6600 block of North Kedzie Avenue.   CPD staffers lead games and stoked the magic with a bubble-blowing machine set to music, creating a “Midsummer’s Night Dream” effect against the trees.

“It makes the neighborhood better,” said Hannah Wolod, who enjoyed an hour on the grass with her husband and baby.  “This is a family neighborhood, and it’s cool to see kids and families play and meet new people.”

Sponsored by Jewish Neighborhood Development Council, the event showcased the south end of Park 538, which runs along Kedzie Avenue from the baseball stadium at Devon north to Touhy.  As a result of a proposal developed by JNDC, a major swath of Park 538 is now in the third year of restoration to natural prairie and development as a community resource, managed by Chicago Park District, Metropolitan Water Reclamation District, Peggy Notebaert Museum and Audubon Society.